Have you ever felt your heart
whisked away into a surprising
and mysterious Love?

This is week 7 for the Book Study over at Michele Morin's site: Living Our Days, as she has invited us to join in for the discussion of C.S. Lewis' "Till We Have Faces." I must admit that after last week's (click here for my thoughts on that) intense passages, where Orual chose such a dark path, I had a hard time wanting to read what would happen next. So, when I finally picked up the book to read again, I was expecting to find the wasteland feelings that Orual was set to walk in. However, I was not expecting to find a bright spot in a love that was manifest in an almost hidden event.

My own heart is finding a surprising Love
from my Dear Lord, as He persists in calling me to a place of Stillness in His Heart.

Orual and her Greek Slave/Tutor, "The Fox," continue to have a deep relationship, even as Orual faces the prospect of the King's imminent death, and her progression into becoming the Queen. As one of her first duties to protect the Kingdom, Orual is thrust into the prospect of a dangerous duel with a neighboring Kingdom's wicked Prince.  Of course, The Fox is against the prospect of Orual taking up the sword-fight herself, even though he finds out that she has been secretly coached by Bardia in the skill.  He argues with her, and pleads for her to give it up. But then the next day he approaches her with this thought, that could almost be brushed over in the quickness of the day's events:

"Daughter, I did badly last night. I think this offer to fight the Prince yourself is foolish, and what's more, unseemly. But I was wrong to weep and beg and try to force you by your Love. Love is not a thing to be so used."

I expected the story to stop, and for all to pay attention right then! Wasn't this the very thing that Oraul needed to hear about true love? Wasn't this the very thing that she had herself tried to force on Psyche in her own selfishness?  But no, the story moved on, and my heart was left to wonder at the brief encounter.  Until pages later, after the King finally succumbed to his illness, and Orual was made Queen, her first official duty was to grant her Dear Fox his freedom.  She realized what that freedom meant for one who had so longed for his own country for a lifetime of years. Oh! In her giving him that right, she faced not just Psyche gone forever, and not just years of wasteland ahead of her as she felt the god's anger with her, now she faced the very real possibility of one who had been more a true Father to her than her own Father had ever been, walking out of her life also. Of course he would choose the freedom of finding his own country again. Who would not?

I have known those longings
They feel as lifetime journeys
Even if time does not agree
The heart knows a different beat
And looks for a country
A Heaven Home
Fairer than any I see before me. 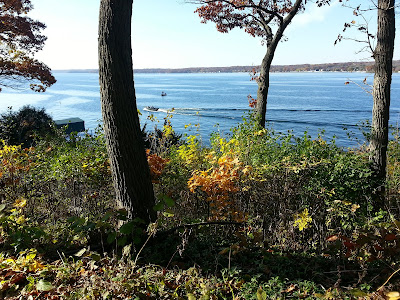 But after a long night of inner struggles, The Fox meets Oraul with these words:


"Wish me well, daughter. For I have won a battle. What's best for his fellows must be best for a man. I am but a limb of the Whole and must work in the socket where I'm put. I'll stay."

And once again, C.S. Lewis had me weeping when I least expected to do so. From the heart of a Greek Slave, who held onto Philosophy and Rational Thinking as his sole foundation, he yet understood the depth of what True Love looked like.  He embraced his part in the Story, in Orual's life, as best for himself even if it required his own surrender.

How many times have I heard
my Lord whisper
deep into my heart
"Choose the better way."
"Choose the way of Love."

Greater love has no one than this: to lay down one’s life for one’s friends.

In these days approaching the Season of Lent,
My heart is drawn to the One who faced the ultimate test of True Love.
His heart won the battle
And gave what I could never give
The Truest Sacrifice
of Love:
His Life for mine.

How will I respond
to Love that is so pure?

Could I choose
to surrender my will for His?

Could we see
What only Love would know,
Our hearts would run
to give Him all.

If you are looking for a great Devotional
especially for the Lenten Season,
my blogging friend,
Susan Chamberlain Shipe,
has just finished this beautiful book.
Find it Here at Amazon.


If you are interested in reading any of the posts pertaining to the book study of C.S. Lewis' Till We Have Faces, you can find an index to the series by clicking here.