Shade for our Souls

The hot tropical sun baked every pore of my exposed skin. How thankful I was to my Vietnamese daughter-in-law's family for their insistence that I wear some kind of long sleeves.

Six years ago I was in Vietnam, riding past the rice paddies on my first motorbike excursion. The young nephew who had been assigned to drive while I held on (not too tightly, I hoped) behind him, was very gracious to this American Grandma. 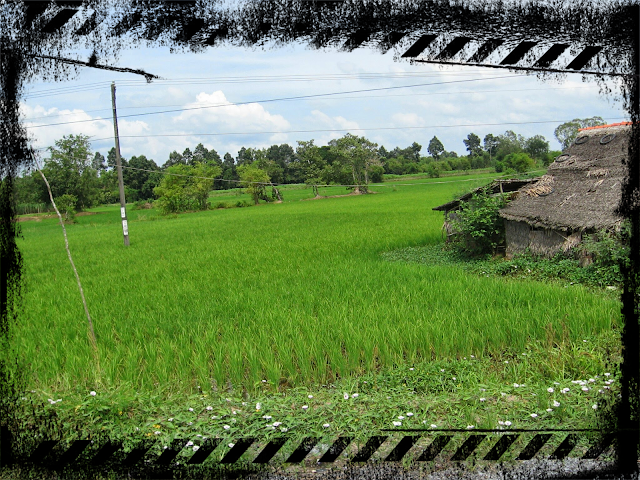 How much hotter could it get, I wondered? The day already felt like I was in a sauna, and I had thought the breeze of the driving might be refreshing. Obviously I had never experienced this kind of baking sun, exposed in the open landscape! I longed for some kind of relief from the fiery heat, as we rode.  And it was then that the verse from my morning's reading became more real to me than it had ever been:

"The Lord watches over you—
the Lord is your shade at your right hand;
the sun will not harm you by day,
nor the moon by night."
Psalm 121:5-6

I spoke the verse again and again, until I felt the very Presence of God covering me with His safety, speaking to my burning soul that He would be my true shade.


Is there a place of safety from the burning heat, from the searing of our souls,
that we are meant to share?


We find our friend, Jayber Crow, in such a place for this week's portion over at Michele Morin's site

where she has invited us to join in an online book study of Jayber Crow, by Wendell Berry.


Jayber, the "bachelor barber," has begun to see himself as a true member of the community, when World War 2 sets in. Having been denied a place of service himself, because of a medical difficulty, he yet found himself saying:

Jayber had begun to experience what a true community feels like: what one person walks through does overflow onto the others within that community.

As Jayber became more comfortable in his own shop, there were many nights after business was completed, that he lingered in his own barber chair (how cozy that must have been, in the days before our nice "Lazy-Boy" recliners!) finding it a comfortable spot for reading and relaxing. Often times if another lone soul was out wandering the streets, they might find themselves drawn to the cozy feeling of the empty barbershop themselves, knowing that a listening ear was waiting for them there.


In those awful years of the War, when the searing hot pain of grief became overwhelming, one father wandered in and just sat quietly. From within that peaceful setting, he shared about a dream of his lost son that had awakened a fresh pouring of grief:


"He told me this in a voice as steady and even as if it were only another day’s news, and then he said, 'All I could do was hug him and cry.' And then I could no longer sit in that tall chair. I had to come down. I came down and went over and sat beside Mat. If he had cried, I would have. We both could have, but we didn’t. We sat together for a long time and said not a word. After a while, though the grief did not go away from us, it grew quiet. What had seemed a storm wailing through the entire darkness seemed to come in at last and lie down."


And the tears that could not be shed by them, were shed by me. This "Shade of God's Presence" is the one constant thing we can offer to those who dwell in community with us. We may not always have a wise word. We might not even be able to serve or help in the way that we wish we could.

Asks us to extend that Shade
To invite others in
Who are burning
in pain and grief.

We can sit with each other
And know
That our restless souls
Only find rest in HIM.


I have found such shade and safety
with ones who have
sat with me.

If there is a burning in your soul,
please let me pray with you,
and join you
in your own place of pain.

The Community of our Lord,
The Body of Christ,
has a beautiful shade
that is meant to be shared.


Jayber Crow, by Wendell Berry, can be found at Amazon,
by clicking here.