A Friend of God 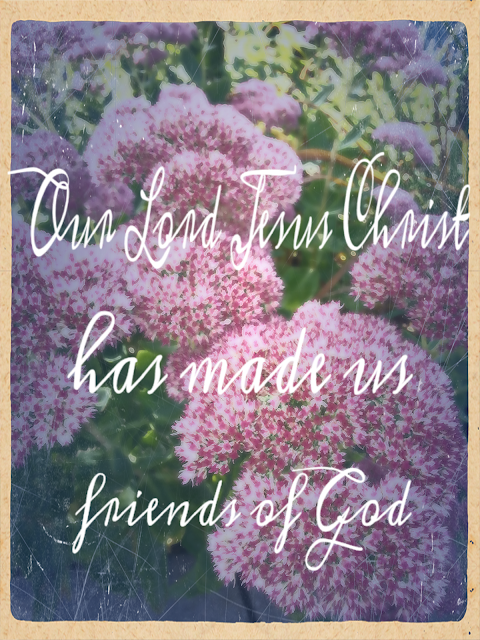 "When we were utterly helpless, Christ came at just the right time and died for us sinners. So now we can rejoice in our wonderful new relationship with God because our Lord Jesus Christ has made us friends of God."
Romans 5:6,11

If you were in a Church Service within the last 10 years, chances are you have sung the song that is based on this Scripture Passage.  When I first heard the song, I felt a little embarrassed by it, and thought, "Isn't that song a bit arrogant? I mean, how can I stand and just sing those words out loud like that?"  And when I had those thoughts, I realized how often the enemy tries to dupe us into taking a lower standpoint than what God has created for us.

It's Week 11, and the final week with our friend Jayber.  In case you missed any of the posts in this series, and would like to catch up, I will post an index at the end of today's post.
I am so grateful to Michele Morin at
Living Our Days,
for the beautiful way that she has opened her site and her heart to lead us in such an enriching study of
Jayber Crow by Wendell Berry.

By the end of this book, it was the 1980's, and the little village of Port William had succumbed to the fate of so many small towns, and dwindled down to a handful of residents. The farms in the area had also suffered the fate of modernization and overzealous attempts to be bigger and better every year. In particular, the farm of the woman that Jayber had secretly loved had been worn to a frazzle as well.

But there yet remained an untouched patch of forest land, passed down through the generations, called "The Nest Egg," where Jayber often found himself communing with nature, and where I found some of Wendell Berry's finest writing:

"Above those, the big trees and the vines went up to the crown of foliage at the top. And at all these aboveground stories there was a moving and singing foliage of birds. Everywhere there were dens and holes and hollows and secret nests. When you were there you could be sure that you were being seen, and that you more than likely would not see what was seeing you. Everything there seemed to belong where it was. That was why I went there. And I went to feel the change that that place always made in me. Always, as soon as I came in under the big trees, I began to go slowly and quietly."


One afternoon as Jayber was resting there and fell asleep, he awoke to find that Mattie, the woman he secretly loved, was coming up the same wooded path, and the two of them found themselves in a woodland hush of nature. Hardly speaking, never touching, yet they would arrive there at the same time, purely by accident, at least a few times every year. Jayber counted it as a special connection of hearts that could not be shared in any other way.

We've discussed this uncomfortable side of a "platonic" emotional relationship in the book study, and most of us have concluded that it's a little wierd and not quite "pure" in the fullest sense of the word.  Nevertheless, Jayber was moved to find what real love looks like because of his love for Mattie.

For you see, his chiefest enemy was Mattie's husband.

But it was not because he had Mattie and Jayber did not, no, it was because Troy, (Mattie's husband,) had no true love and reverence for the woman that Mattie really was.  And this was finally most fully realized on the day that Jayber heard a horrible crashing of machinery in the woods.

Mattie had been terminally ill for several months, and by word of mouth, Jayber found out that she was in the hospital, probably never to recover.  Mattie's husband had mortgaged the farm to it's fullest amount, but borrowed yet again and again. He had one more option left, and that is what Jayber came upon, as he followed the sound that he had heard:

"It was a painful walk, for I was still hoping to be proved wrong, but every step I took confirmed that I was right. The thickety little strip of bottomland along the lower end of Coulter Branch had been cleared off with a bulldozer, and that was where they were yarding up the logs. Tremendous logs were lying there, side by side. They made me think of beached whales, great living creatures heaved out of their element at last. But all the logs were not big. Troy Chatham had sold every marketable stick, every tree big enough to make two two-by-fours."


And Jayber was furious. Did Troy really know his wife so little, that he could sell off the one remaining part of land so dear to her, all while she was on her deathbed? As Jayber felt the anger and hate turning to rage inside of himself, a curtain parted, and the swaggering self-assured man that Troy had always played himself to be, was finally revealed to Jayber:

"So there he was, a man who had been given everything and did not know it, who had lost it all and now knew it, and who was boasting and grinning only to pretend for a few hours longer that he did not know it. He was an exhausted man on the way back, not to the nothing that he had when he started out, but to the nothing that everything had been created from—and so, I pray, to mercy. And there I was, a man losing what I was never given, a man yet rich with love, a man whose knees were weakening against gravity, who needed to go somewhere and lie down."


In time, Jayber would become friends with Troy, and find that forgiveness had been planted within him. But on that day, he had to face a kind of dying first:

"But that day I couldn’t stay with him any longer. I needed to leave him and his desperate merchandise and that woods of once-upon-a-time. I needed to go and find a place to lie down. That urge was in me like a natural force. Like a woman or an animal in labor, I longed to lie down, for I was heavy, not with new life but with much dying, many deaths. I had in me the shaking of the fall of all things. I wanted to get as low as I could, as I thought I would want to do had I been in the top of a windblown tree or in a little boat in a storm."

And I recognized the death Jayber spoke of.

Haven't I faced that death myself?

Haven't I been brought low when I have seen

into the depth of my own sinful heart?


And while I don't want to give away the ending of the book for any who might choose to read it still, I must say that my heart was left with longing for a man who never seemed to enter into friendship with the ONE who loved Him most of all.


Jayber found forgiveness with God.
He knew that only because of Jesus' death
are any of us fully forgiven.


Jayber even found forgiveness for a
man he had hated.


But I never saw that He found
the friend that would stick
closer than a brother.


And for that, my heart wept.


And once again, my aching cries out for those around me and even for myself. Because the enemy of our souls has duped us into a position lower than what Jesus came to bring us. Jesus took up our sins to bring us into friendship with God. Anything less than that is simply a lie.

Will I answer His call?

Will I go after those I love

and speak in His Name

to join Him at the table

to find a friendship deeper than any

a love so much higher than

all we can grasp?

Index for the series on Jayber Crow: