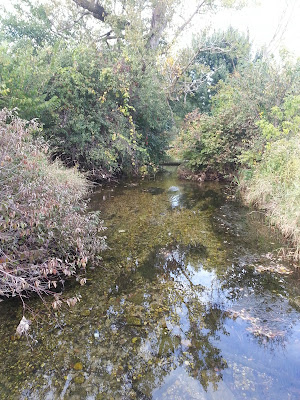 I sat on the bridge
still as a stone
And watched the fish
darting and dashing
under the rocks
and into the shadows.

And my heart
felt as one
knew the quiver
that a stirring in the water
could bring.

Two and a half years ago, when my man and I walked to that bridge, I did not realize that I had already begun this Journey with Chronic Illness. Even though my joints had started their swelling, the first jolting-awake-with-fire-flare-pain was still several days away.  But in my heart there was a tiredness running so deep, and a sensitivity so acute that I felt I must be slipping into a Spiritual Fog of some sort.

My life had been running on empty-full-empty-again for so long that I feared what might happen if the full failed to appear once again.

the empty overtook me,

And my spinning life found a new

rhythm by which to dance.

I spent the next year just trying to keep my darting and dashing emotions on some sort of even plane, as the medications were set before me, one after another. There were rashes and nausea and headaches and side effects more shameful than I care to recount.

But I never walked alone.

Have you felt that quivering in the water?

Have you known that stirring when Jesus sets down beside you,
and enters into the ocean of your troubles?

As my body finally accepted the proper medication, I spent the next year reeling from one diagnosis after another, and more tests than I care to recount. I watched my man dealing with his own health struggles.

And I felt the quivering yet again,

telling me I would never be alone.

I heard the whispers to

come away and rest awhile.

So, as this year of 2017 approached, I prayed for a #OneWord365, a Word that might set the course for this new year. Not unlike the other times I heard Him speak for #OneWordLent, and #OneWordAdvent, and even the theme for #Write31Days, I counted on God to speak what He wanted to give me.

Because the Word He gave was
stillness.

Where can we hide when the shadows are flitting
and our hearts are still darting?

There is a place of stillness
that centers in Jesus' heart.

There is a place of knowing God
that finds its rest in loving Him.

So, while my rhythm may still move to slow,
and my feet may not dance as I would want them to,
My Lord calls me in
and my heart runs to Him.


Thank you so much to all who prayed for my husband's hand surgeries! God is restoring him to health, and helping him as he returns to work this week!


I am linking this week with
Jennifer Dukes Lee, #TellHisStory