Day 1: Listen to what God is Saying 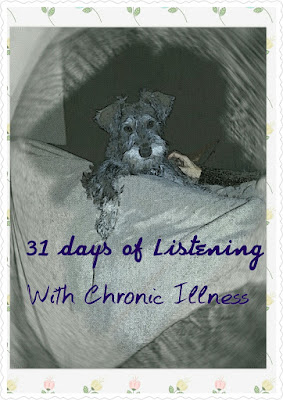 Two years ago, September 2014, I should have seen the signs marking what was coming . . .

I thought those weird pains and funny little swellings were just part of getting older.

I wasn't listening to my body then

In fact, I was barely on speaking terms with my body. It just did what I expected it to, and it followed along with my over-pushing and over-working ways.

Until the night I woke up with screaming dark pain.

So when my Family Physician immediately ordered a Rheumatic Arthritis blood panel at my yearly physical, I thought she was over-reacting.  "Can't you just give me some good exercises to take care of these sore hands?"

When the results returned, all sero-positive for Rheumatoid Arthritis, and they rushed me in to the Rheumatologist the very next week, I should have started listening to my body then . . .

But I thought I still had some measure of control.

I will beat this thing. I will do everything possible to keep this disease in check and work towards REMISSION.

So I faithfully tried all the medications the Specialist prescribed. I changed my diet and eliminated all sorts of possible "inflammation triggers." I found out which essential oils were best to keep inflammation at bay. And I began an exercise and activity journal, trying to trace out any unhealthy habits.

But the swelling continued, the constant aching increased, and I began the process of losing functionality in some of my joints.  Not to mention the side effects of those crazy expensive new medications. First one and then another were tried, in an effort to find the "Goldilocks" dosage that would be "just right" for me. My activity level was slowly trickling down, month by month my energy was sinking. I prayed and journaled (as much as possible, when the pencil refused to be held by unsteady, painful fingers,) but God was not bringing the healing that I had asked for.

A few months into the journey, I had a dream, in which I was walking through the halls of an office building.  Along the way, people came to walk with me, and each had an idea of how I could be cured:  try this medication, eat these foods, stay away from these toxins, make use of this new treatment, etc.  Eventually we all came to a conference room with a large round table, where we all took a seat.  All of the people continued to talk to me, speaking more loudly with each new phrase uttered. But one elderly woman, that I hadn't noticed before, sat silently across from me. Her eyes compelled me to look her way, and suddenly I longed to hear her words above the rest.  It seemed that I could hear her thoughts whispering, "You know what I'm going to say, don't you? All of this advice to you is fine, some of it is good for you even. But listen to what God is saying! He is saying, 'All of this that you are going through is MINE, because YOU are Mine, and this will be for GOD'S GLORY. Obey what I am asking of you, and walk with ME through this time of Brokenness and Prayer.'"

Isaiah 43:1(NIV) But now, this is what the Lord says— he who created you, Jacob, he who formed you, Israel: “Do not fear, for I have redeemed you; I have summoned you by name; you are mine.

Isaiah 44:2 (NIV) This is what the Lord says— he who made you, who formed you in the womb, and who will help you: Do not be afraid, Jacob, my servant, Jeshurun,[a] whom I have chosen.

Are you in a place of silence? Is there a listening that you have been ignoring there?  If so, join me this month as we seek together to be better listeners. I would be honored to have you travel with me.

This is Day 1 of the #Write31Days Challenge: 31 Days of Listening with Chronic Illness.  Here is where the index for the rest of the month will find a home.  If  you come back to my blog and missed a post, hopefully you can click on any of the other days for a link to those entries.

Today I am linking over at the #Write31Days Challenge

Come join me and find scores of other bloggers who are also writing on Inspirational Topics!
at October 01, 2016
Email ThisBlogThis!Share to TwitterShare to FacebookShare to Pinterest
Labels: #31daysOfListeningWithChronicIllness, #Write31DaysChallenge, Rheumatoid Arthritis